A photographer and writer from St. Louis Magazine spent the day with Joe and put together a nice summary of what Lumber Logs does in their October issue. Herre is a link:

https://www.stlmag.com/news/lumber-logs-recycles-trees-from-the-st-louis-forest/
Posted by Tom @ Lumber Logs at 10:29 AM No comments:

After a series of kiln part replacements we finally have 4/4 and 5/4 walnut dry and in the bins for sale. Because this took way longer to sort out than we had anticipated there is still a backlog of air dry material waiting its turn through the kiln to remove that last 10% MC. But we are on it and as our higher capacity lumber racks get installed we will be filling them with the quality material you have come to expect from us.

Thank you for your patience!
Posted by Tom @ Lumber Logs at 1:53 PM No comments:

Our walnut bins are empty.

We still have some nice walnut live edge slabs but if you are wanting regular rough sawn boards then we will disappoint. Walnut has been THE hot selling species for a few years now, understandably so since its look and working characteristics are unsurpassed. We have raised our price incrementally as keeping up with demand has been a challenge; this is our normal practice. It appears however that we were not aggressive enough in raising prices. I found nobody locally selling average walnut for less than $8/bf and our price for our finest boards was only $6.50. And ours has virtually no sapwood since we cut it off at the mill whereas sapwood usually fills the bins around town.

So rather than having no walnut at $6.50 we now have no walnut at $7 for an "A" board (very nice) and $8.50 for premium A+ material. It will still be a couple months or so before the air drying walnut we have will go through the kiln and be in the bins for sale. It will still be the cheapest in town and enviably nice stuff. (Have you shopped around? I have.)

Value is still our niche. But low prices without inventory isn't of much value to anybody.

For a similar reason eastern redcedar is no longer our cheapest offering. At $1.25 demand outstripped our supply of logs so we now ask $1.75 for the lowest grade (B) boards.
Posted by Tom @ Lumber Logs at 12:50 PM No comments:

Just out of the kiln, some wide 8/4 chunks of buckeye: 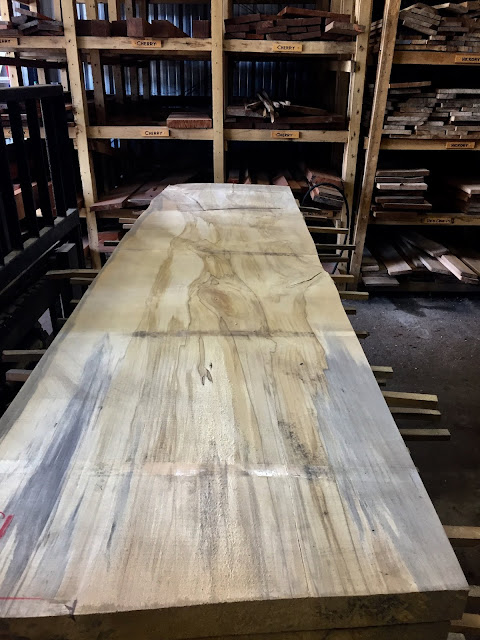 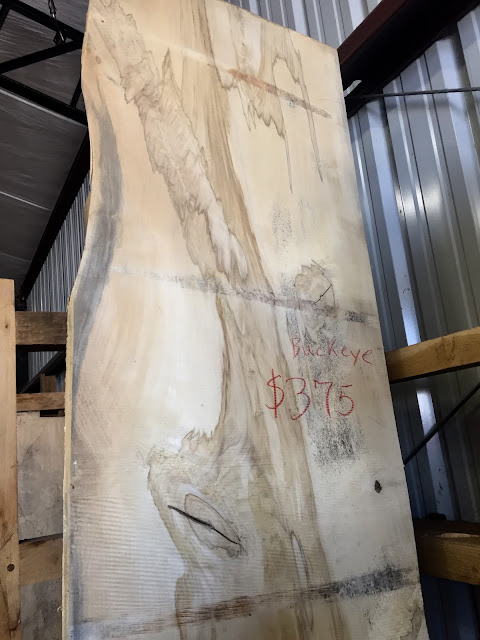 Do not let the infrequent blog posts make you think that we are not still in business: we are.

This blog was originally intended to simply let you know what we are doing and what we offer. That is still the objective here and the reason posts have become less frequent is simply because we are doing and offering the same thing as we have since 2004. We haul logs for local tree cutters and see that they get to a mill instead of mulched, and we offer the finest selection of domestic hardwood lumber in the area. All of our lumber is from the Saint Louis forest exclusively, milled from trees that were cut down by others for a multitude of reasons.

The most meaningful change in the past couple of years is that we now saw our own lumber. Joe is the best sawyer we have ever had because he knows exactly what our customers want and is willing to take the extra effort to get it. Our customers have noticed the quality of the wood we offer; it is flying off the shelves as fast as we can mill it, dry it, and restock. If you work wood anywhere near Saint Louis you should stop in on our retail days (first and third Saturday of each month, 9-11 am) and see what a lumber yard run by woodworkers can be like.

I suppose I could continue posting pictures of wood as it comes off the mill but that can become a little tiresome and generate all sorts of inquiries that don't change when the wood will be ready for purchase. We cut it, air dry it, run it through the kiln to get that last 10% moisture content out, and put it in the bins in the building as fast as our one employee business allows.

I do have an idea or two for some fresh blog posts, so please check back on occasion. One topic will be crotch woods: finding and using it. The figure in wood that grows where the trunk splits into two or more branches is often highly figured and I wondered why more people do not include it in their work. Finding such wood is one reason - few yards carry any at all - but it has characteristics that make it a challenge to design and use too. I have now tackled it multiple times and will soon share my findings.
Posted by Tom @ Lumber Logs at 3:20 PM No comments:

The solar kiln has been with us since our first year on  a parking lot off of Hall Street. There was no structure for sheltering lumber there so we moved to that "structure" on Brown that you can see from the back of our current location on Farlin. That is where it lived for years cranking out dry lumber for 6-8 months a year:

Since it only was effective for a portion of the year it soon became a bottleneck for getting dry wood into bins for sale. After we moved to our very own lot with better electrical arrangements we slapped a dehumidifier kiln on the front and extended the drying season to all but the coldest month or two.

The two layers of deteriorating polycarbonate that form the slanted solar roof were poor insulation for those cold months so it was better than nothing in, say, March, but it did not work as well as a dedicated dehumidifier kiln should. After 14 years and two moves it was time to replace the solar kiln completely: 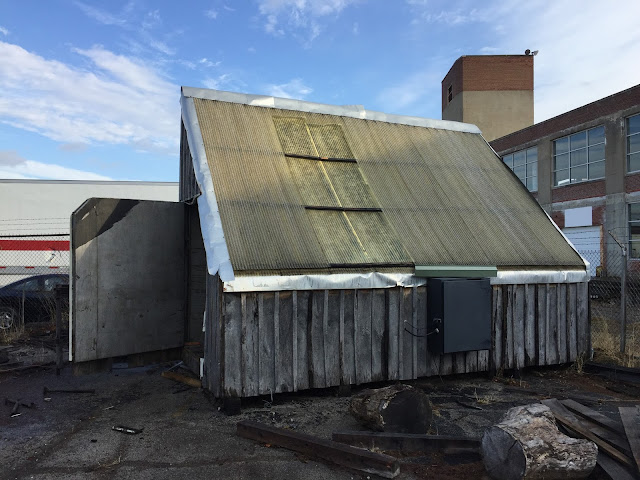 We considered a sea container but for the price of an uninsulated one we found an old beer distributing reefer truck: 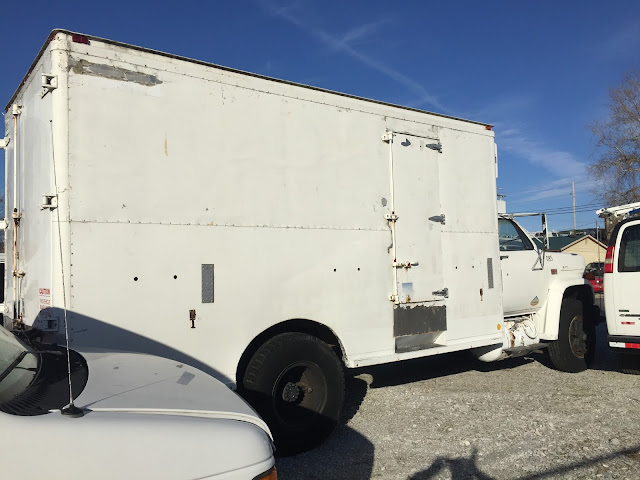 Our plan was to remove the insulated box and jettison the remainder of the truck. First Joe cuts off the sheet metal hanging below the floor: 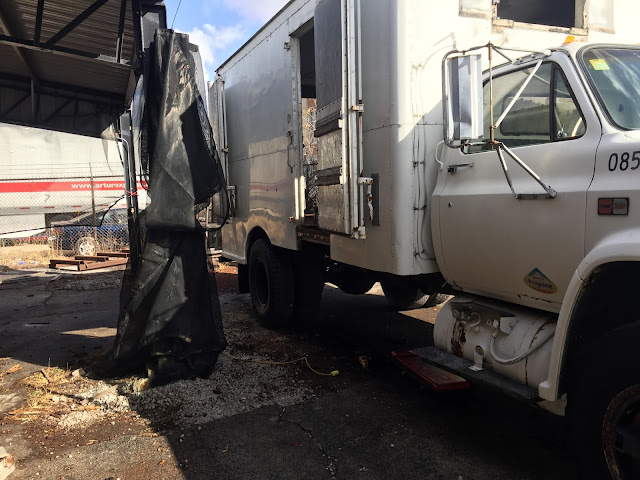 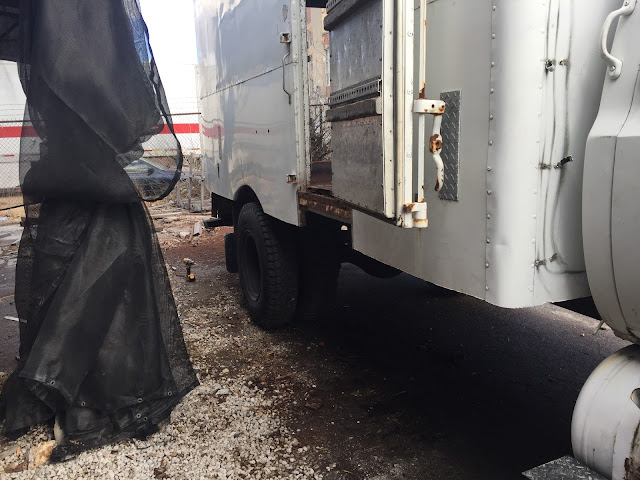 That's better. Other side too and unbolt the underside. All loose and ready to be lifted off the truck frame: 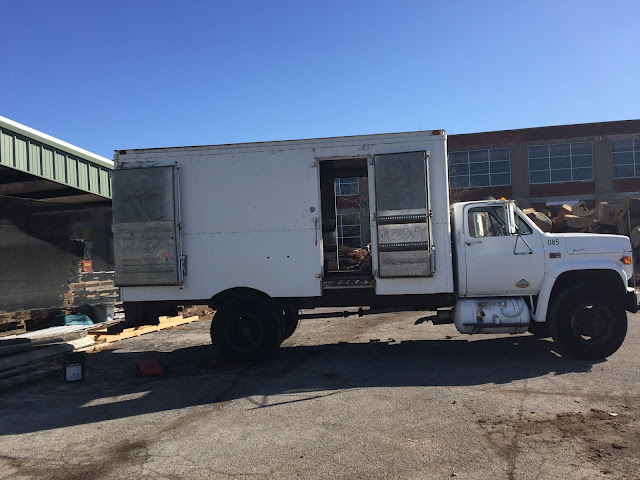 Some creative strapping to the forklift and we hope it is enough to get it into the air. It is! 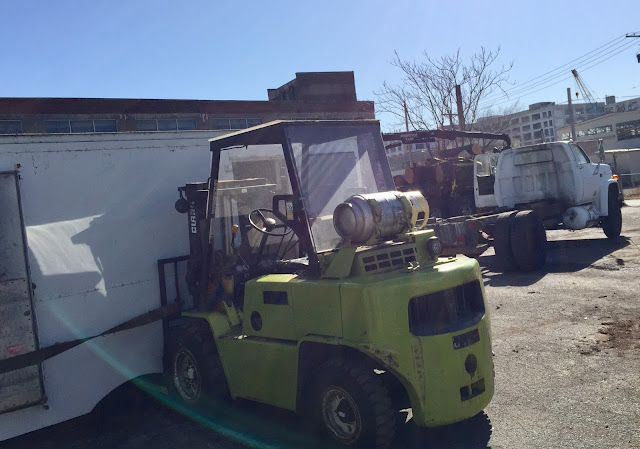 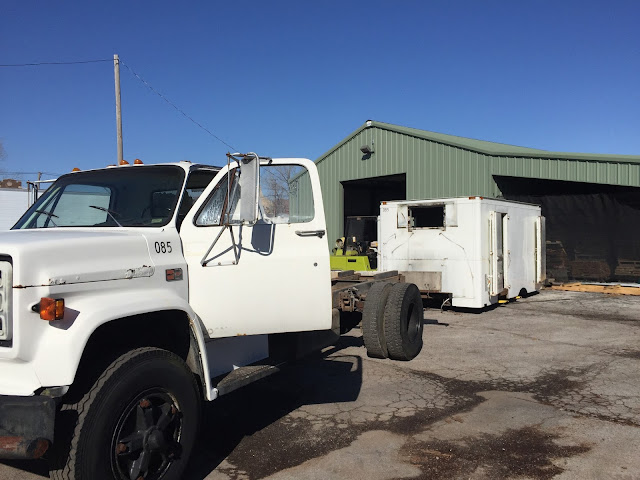 Here it is shoved into its new home behind our building. Those long fork extensions allow us to load the pallets from the end: 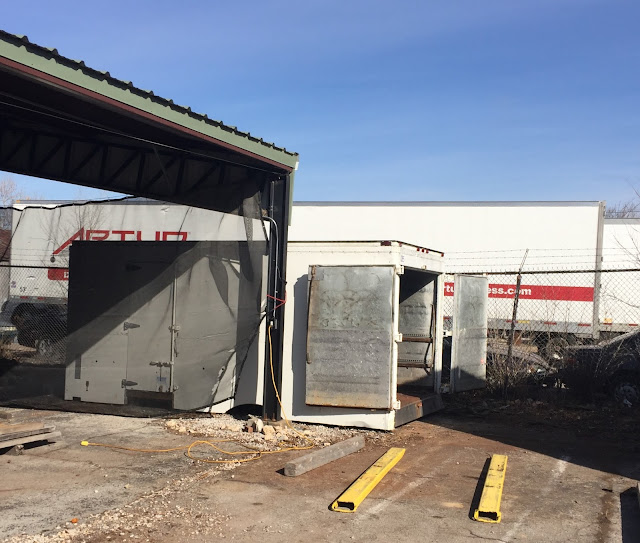 Plywood for the floor: 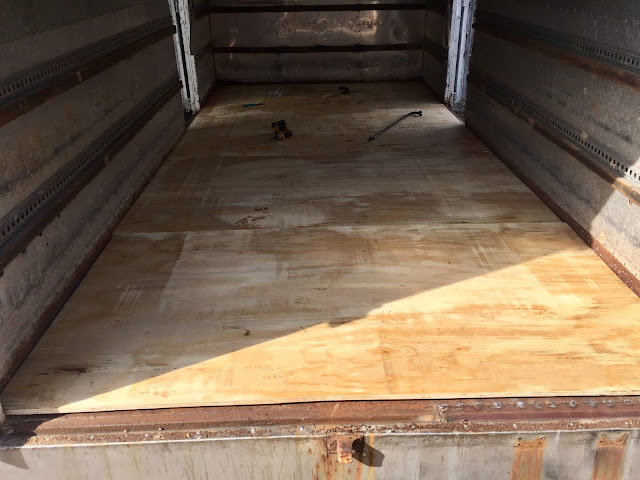 And its first load of walnut and cherry: 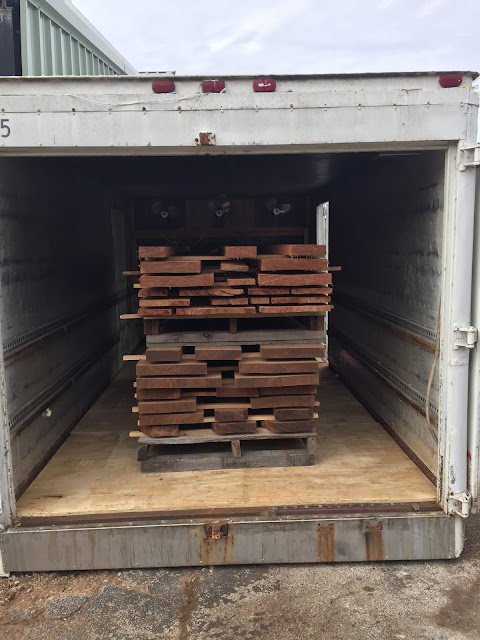 Just as when we allowed sawyer issues to build up a backlog of saw logs, the accumulated kiln bottleneck will take some time to relieve completely but this is an arrangement that should convert air dry to kiln dry in a week or two and catch us up.  It was recently 120 degrees Fahrenheit in there on a 30 degree day.

Sawmill has been busy 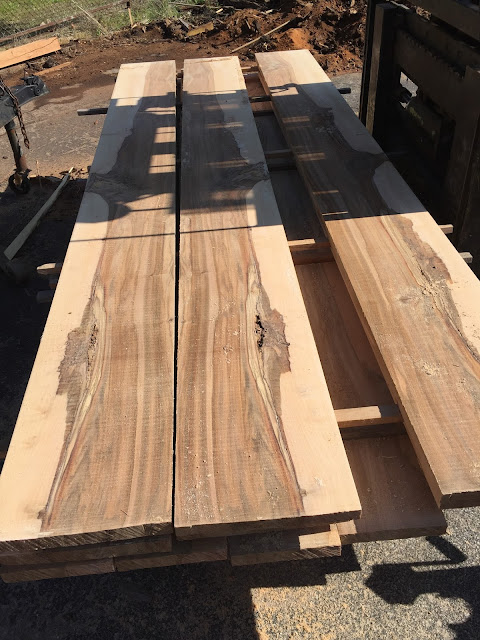 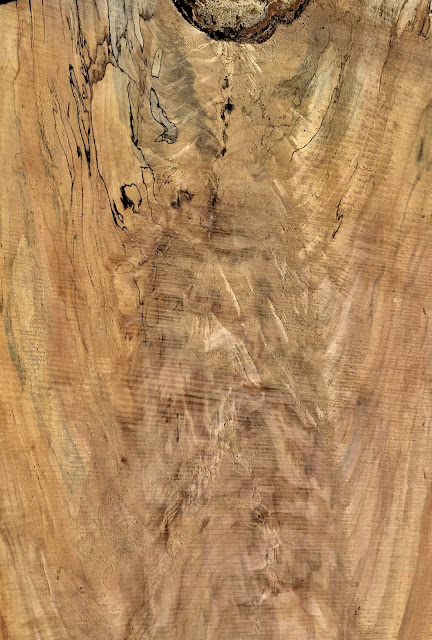 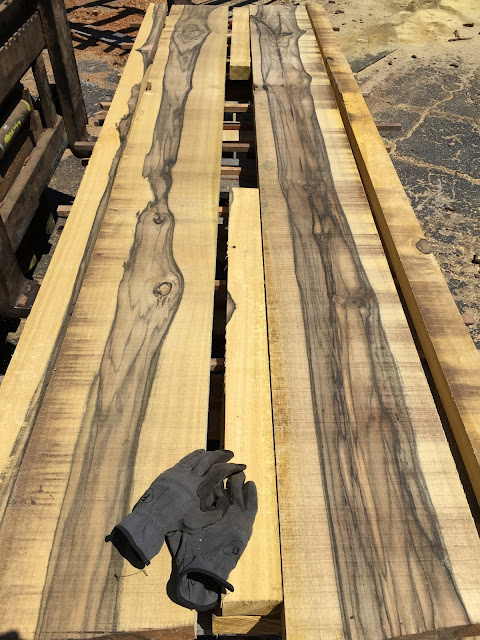 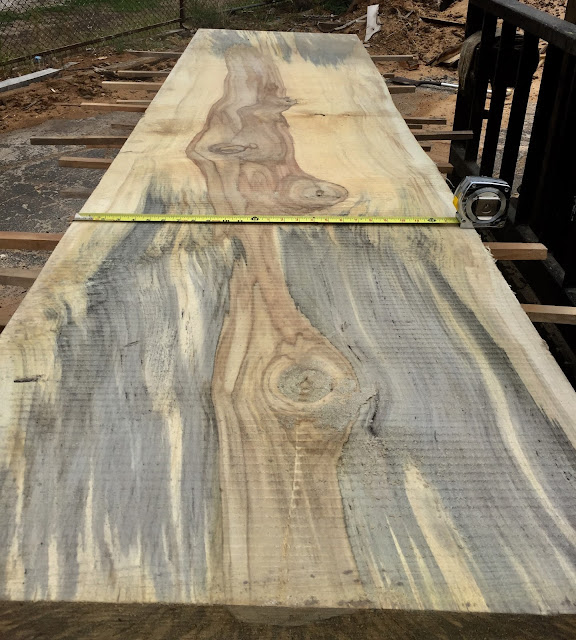 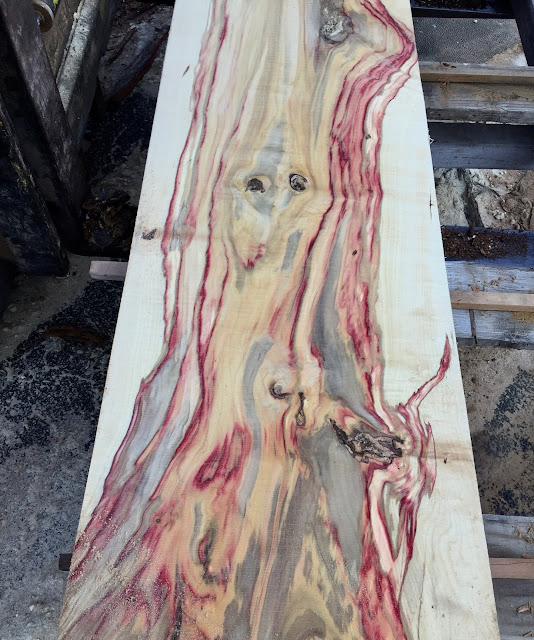 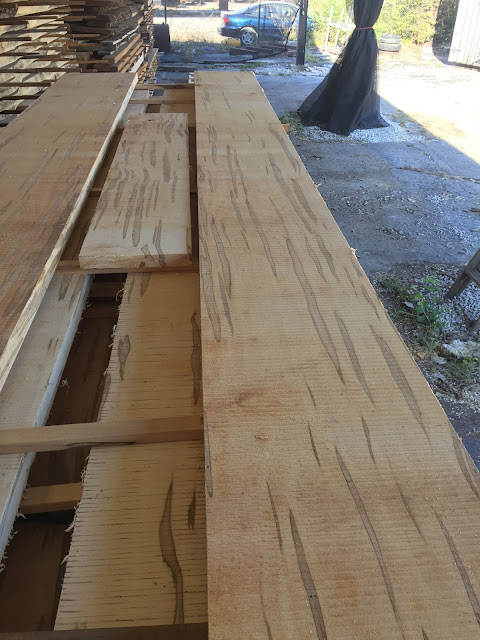 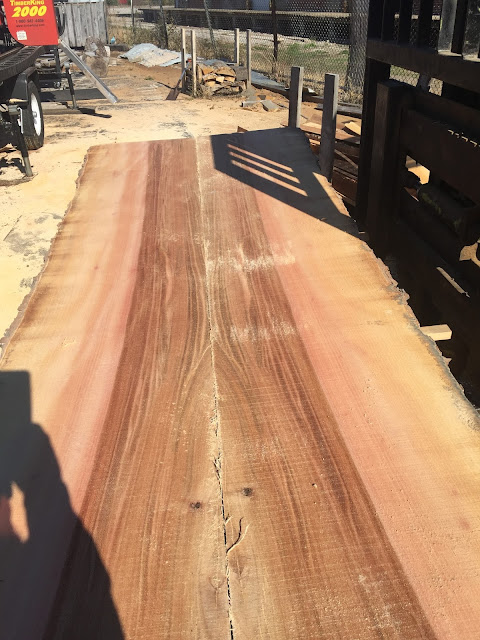 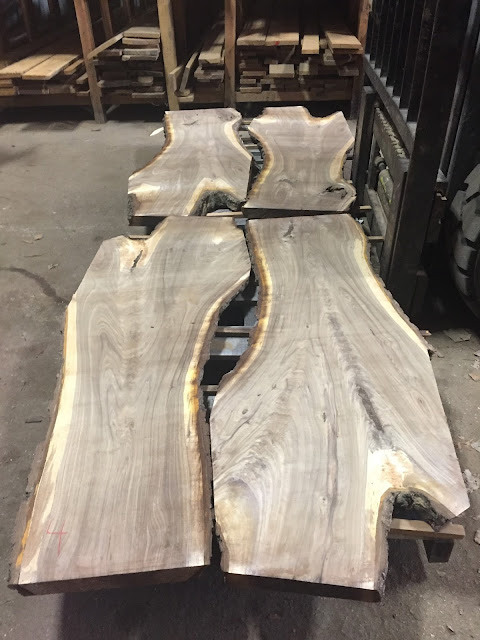 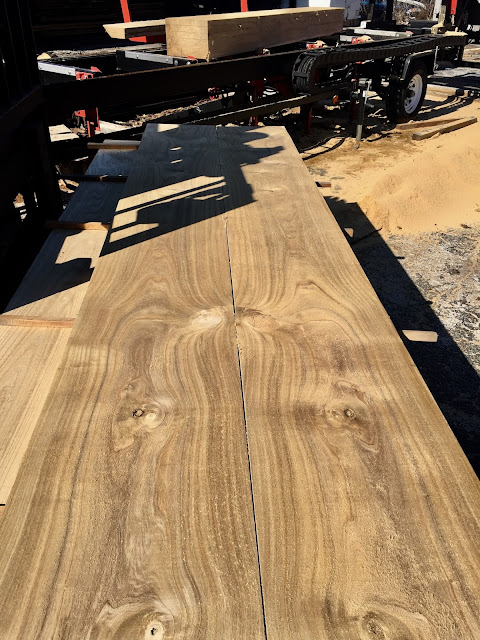 Look for these and more to come into the dry sale bins throughout the year.
Posted by Tom @ Lumber Logs at 11:34 AM No comments:

Tom @ Lumber Logs
St. Louis, MO, United States
Lumber Logs is an urban log recycler in St. Louis. We collect lumber-worthy logs that normally would end up being ground up, burned or buried in a landfill and see that they get a more noble end. Some we select and have sawn into lumber we sell. Joe and Tom are the partners in this operation. Tom writes this blog. Complete details are here: http://woodfinder.com/listings/lumber-logs-llc